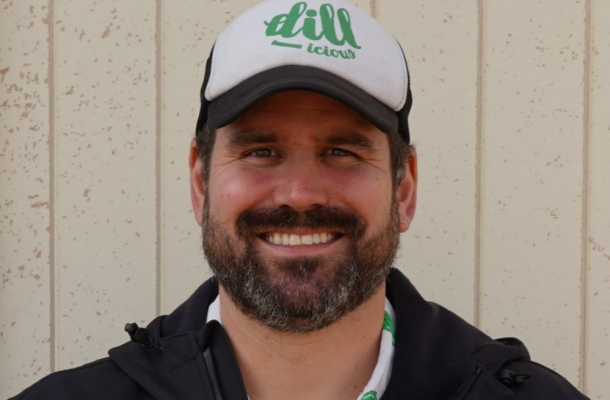 Executive summary
The Universal Business School Sydney (UBSS) commissioned Cyril Jankoff and Daniel Bendel to write a second book for them, a book on entrepreneurs. Its purpose is to give new local and international undergraduate and MBA students a feel of what everyday Australian business success looks like. To give a realistic view of successful entrepreneurship the authors chose 15 successful entrepreneurs and interviewed them. This is the 15th interview. Each interviewee was asked the same questions and at a later stage the authors reviewed all interviews and summarised the commonalities. The focus of the cases is on Sections III to VI.

Key points from this interview

James Barbour
From selling cucumbers to pickling them. James has always been a pickle person. Growing up in Virginia, USA his mother claims that from as early as age 2, he’s been eagerly eating them. He met the love of his life, Liza (from the Mornington Peninsula), whilst volunteering in Tonga and after over a decade in Melbourne, they started a business making American-style dill pickles. They called their business "Dillicious”. There has never been a dill moment since then.

Authors’ note – That joke has put us into a real pickle 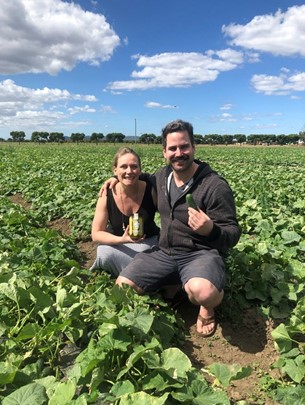 James and Liza in the fields

I. Key dates
The key dates are summarised in the below chart, and are:

Authors note – It’s been a jarring experience, (sorry the authors are just a couple of Dills) 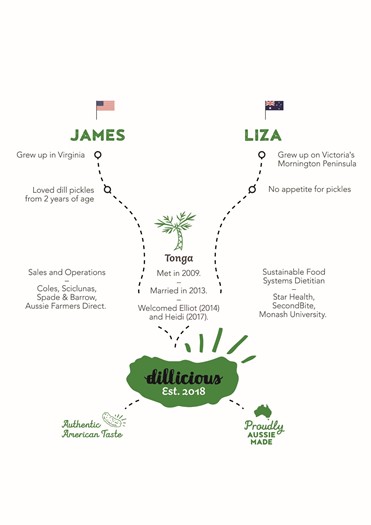 The funds received have enabled them to:

James says that they consider their equity raise as successful although believe a greater investment in Public Relations (PR) Strategy would have seen a much greater fund raise.

Authors’ note – maybe for the next fund raise

The average investment was just over $1,000 although many invested a few hundred dollars and quite a few were $10,000+. James said this is a very interesting area of obtaining finance and great care must be taken to get the marketing and statements about risk and financial projections right. It makes for an interesting comparison to alternative options such as Angel investors, venture capital and to debt finance.

Note - Further information on Equity Crowd Funding see the Sources of Funds section in the final chapter of the book that contain this, and the other 14 interviews. 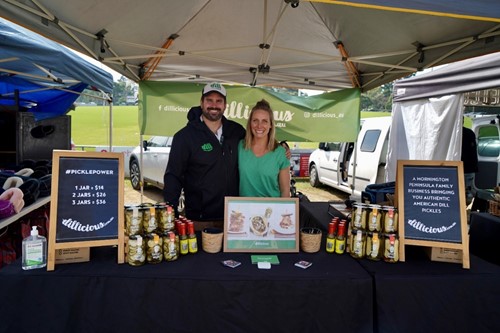 II. Getting to know the person
1. What is success?
James sees business success in simple terms – he likes to see happy smiling customers and seeing the product in people’s hands.

3. What are your hobbies and/or interests?
These days, outside of business, his interests revolve around his family, his wife and children. He has built up a passion for AFL and follows the Sydney Swans. He advises that it did take him a little time to work out the rules.

Authors’ note – good luck with that!

III. Tips
4. How did you get through your worst times?
James believes getting helpful input from others is useful for getting another perspective. James shares both the good things as well as problems with his family and friends and he finds that this gives him great support, without overburdening them. The key is to get the right balance in life.

5. What keeps you awake at night?
Not a lot keeps him awake at night as he is a sound sleeper. Sometimes if something is on his mind it might motivate him to get up early to address the issue.

6. What are your typical daily routines?
James is an early riser, waking between 4-430am and usually reads the news with a coffee for 15 minutes. That is the only time he reads the news to avoid getting distracted. He will then check his emails in case any calls are needed early. James is then off to the warehouse for 9 to 10 hours but Liza and James make sure the family has dinner together every night at 5.30 to 6pm. Then he has time with his wife, Liza to watch the news or a TV show. He and Liza have a dedicated ‘business meeting’ a couple of evenings a week, with an agenda and all. As a husband-wife team they believe this is important to contain their Dillicious chat so that it doesn’t dominate their family time. While James will check his emails approximately hourly, he doesn’t let email control his schedule.

7. What advice would you give yourself starting out?
He would advise himself not to worry about failing. Some people want to get things perfect, but some things can never be perfect. James says sometimes you can overthink issues and the key is to decide and then implement.

IV. Business case examples
8. Provide a case you managed well and why?
A national retail chain contacted Dillicious as they were interested in their product. This was their first really large customer that came to them directly rather via their distributor. The customer loved their product, but price and distribution were questioned. James was politely firm on their pricing and preference for using his existing distribution partner. The customer agreed to James’s terms and because of the introduction to James’s distributor, went on to source additional products from their gourmet cheese range.

9. Provide a case that did not go well and why?
When James first started the business, his distributor lined up a particular customer for James to supply. Dillicious started production based on verbal projected orders and had three weeks’ stock ready to supply. The customer did not complete the order due to pricing issues. It took James many months to sell the stock to alternative customers. It was a very stressful period.

10. What conclusions can be drawn by comparing these cases?
The main lesson from the above cases is the old saying “you need to know what you can do and what you can’t do”. The benefit of being professional and sticking to your principles was clearly of benefit in Question 8. In question 9 there are some cases where you may produce without an order, depending on the Industry you are in and even more importantly, after you have developed a trusting relationship with the other party. In this case that had not yet been developed. If you share your information and explain and communicate it clearly, as in question 8, you may be surprised at how people will be willing to assist. James sees that many people get into trouble by not being assertive on what is right for their business. This puts themselves under pressure and leaves them exposed when external volatility such as the Covid19 pandemic occurs.

11. What cultural issues did you experience? How were they overcome? How is Australia different? Were these cases affect by cultural issues?
James said his US accent does raise some questions and thinks it is a net positive. Apart from that, he fits in to a fairly expected “look” of Australian business people so he has had no real surprises.

He does find it interesting to compare business culture in Australia and USA and finds in many areas the US is ahead in strategy.

Authors’ note – see discussion on Equity Fund raising in the chapter on Sources of Finance, where Australia has been 5 to 10 years behind USA. For further information on Equity Crowd Funding see the Sources of Funds section in the final chapter of the book that contain this, and the other 14 interviews.

V. Volatility (for example COVID-19)
12. How has volatility affected your business?
James says the business sells via different distribution channels, but ultimately most of his end customers are restaurants, food courts and other food stores. In March 2020 many businesses closed due to the pandemic and Dillicious dropped 80% in turnover. Also markets were closed, meaning that stream of direct sales was completely paused. Whilst markets were never a large proportion of profit, they served (and continue to serve) an important role in getting the Dillicious name out there. During the pandemic, retail sales increased whilst food service declined. There was a big roller-coaster ride during and between lockdowns.

13. What lasting impact do you think it will have on your business?
James says the need to be ready for volatility has obviously become more crucial. James thinks that the USA does business strategy generally really well and possibly better than Australians who tend to think in more straightforward ways. Global supply chains are clearly a major risk area. Wherever possible, James has long preferred to deal with local suppliers and this is now working in their favour. Consumers are becoming more aware than ever of the quality and source of product so Dillicious’ commitment to source their ingredients locally has been a real point of difference. It is James’ opinion that retailers (including Coles and Woollies) will be driven by consumer demand so as consumers become more aware of these benefits, retailers will respond.

14. What have you learned from it that you will now implement in your business?
James said that Dillicious will remain true to their values while rolling with the punches. James said he and Liza genuinely enjoy thinking outside of the box so when faced with a challenge, they get their heads together and come up with a few plans. They learnt early on, and particularly through their involvement in Monash University’s Generator program, that it’s always a good idea to reach out to people with a diverse range of perspectives and skill sets. So they run their ideas past various people who they consider much smarter than themselves!

VI. Family business
15. Are you in a family business and from your experience what do you think are the advantaged and disadvantages of family working in the business?
Yes, James thinks that his is a family business, even with 240 shareholders (through the Equity fundraising). He loves that the whole family is involved, and the kids enjoy and respect the nature of the pickle business. He provided the following comparative information:

Advantages of family business include: 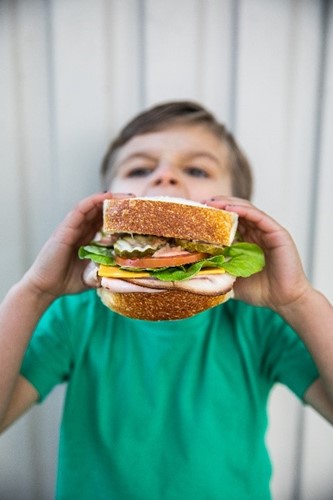 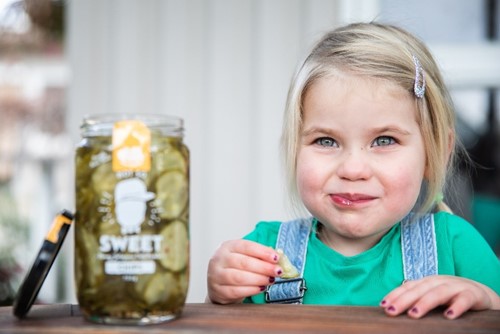 Disadvantages of family business include:

At a market: the CEO and key tasters