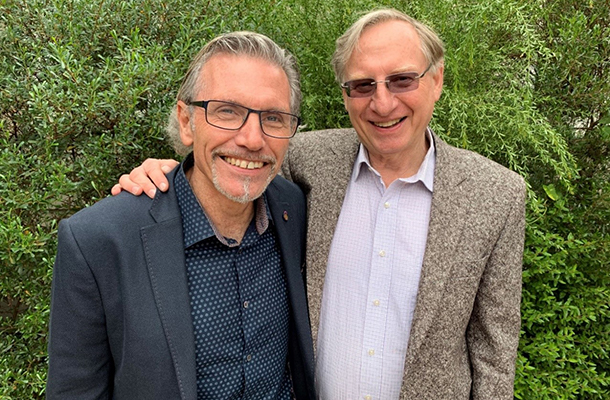 Foreword
The Universal Business School Sydney (UBSS) commissioned Cyril Jankoff and Daniel Bendel to write a second book for them, a book on entrepreneurs. Its purpose is to give new local and international undergraduate and MBA students a feel of what every day Australian business success looks like. To give a realistic view of successful entrepreneurship the authors chose 15 successful entrepreneurs and will interview them. This is the fourth interview. Each interviewee will be asked the same questions and at a later stage the authors will review all interviews and summarise the commonalities. The focus of the cases is on Sections III to VI.

John Engelander
John’s journey to find himself led him to realise his passion for the environment, and then combining this with his “street smarts” and entrepreneurial skills, he formed a successful green cleaning company.

II. Getting to know the person
1. What is success?
John feels that “success is really happiness”. John loves what the country Bhutan (a country between Tibet and China) has done in establishing Gross Domestic Happiness, GDH, and not the more usual economic Gross Domestic Product, GDP, as a key measure of country success. John does not really like to use the word “success” as it implies winners and losers. He would much rather use “fulfilment”, as fulfilment implies a life balance including:

John obtains fulfilment from fun and adventure, making a positive contribution to the world environment. He loves to dance, sing and laugh with his friends and family. He also obtains fulfilment from what he has achieved. John also does not like to use the word “failure” and would prefer to use “a moment when there is a fall” or “a fall” just like when a toddler falls but is determined to use whatever they can to get back up.

3. What are your hobbies and/or Interests?
John is a keen student of life philosophy and is keen to create new business ideas. He is keen on taking on new challenges and is currently learning the piano. He is very attracted to Australia’s abundant outdoors and is keen on activities such as road cycling, mountain bike riding, dirt bike riding, water skiing and snow skiing.

(Author’s note – He also attempted kitesurfing once and John feels that his most epic moment was Heli cycling in New Zealand where he was dropped off at the top of a mountain and cycled to the base).

III. Tips
4. How did you get through your worst times?
John said that in his hard times he sought clarity, and to achieve this he wrote copious notes, brain dumped, drilled down into his thoughts to try to identify gaps and where possible create a flow diagram so he had a road map of the situation. He said that he often writes down questions that need answering. He would think about where he could gather the necessary resources to ultimately bring together the many parts and create a probable outcome. John also notes that “difficult times do not build character, they reveal it”. He feels that exercise and meditation can make an enormous difference and regularly tells himself 3 things:

5. What keeps you awake at night?
John generally sleeps well. However, what can keep him awake is not having a resolution for a specific issue. On the other hand, staying awake may have something to do with excitement looking forward to a fun activity. Late last year he bought a new road bike, and some days could not wait to ride it, and this kept him awake. He loves the thrill of creating that cycling momentum.

6. What are your typical daily routines?
John does not follow set routines. He has a business compass and knows what is needed. He calls it his “True North”. As a result, he prefers to have a more free-flowing lifestyle. He likes not to be under anyone’s control. John is usually in bed by midnight and up at 7 am but this varies widely. John does not have an alarm and uses his body clock to wake.

7. What advice would you give yourself starting out?
In the beginning, he wishes that he believed in himself more. He says “do not believe that other people have the same values as you”. Unfortunately, one cannot trust everyone and we are not all the same. John’s school days were very mixed and he transferred from private to public schooling where he saw a big difference. He feels that from his schooling he really only obtained the basic “three R” skills (reading, writing and ‘rithmetic), however he realises that he can purchase specialist skills whenever needed. These include legal and business advice and he once hired a lecturer from Swinburne University to do research and provide information John needed. John also sees that sometimes people can over-think issues. He feels that it is important not to get stifled with over-analysis, but just get started (See Author’s note below). John considers that one must be careful in taking advice only from accountants who are trained to see the risks and pitfalls. John would give young people who are evaluating whether to go into business three things to consider:

John says he does a mini self-evaluation every day working out what he will be doing that day, and this activity fulfills him. He is always looking at something new to keep himself interested.

(Authors note – The author’s favourite quote is by Woody Allen who said something to the effect that “80% of success is just turning up”).

8. What non-business cross cultural issues did you experience? How were they overcome? How is Australia different?
John considers that there are no cultural issues that affect his business.

IV. Business case examples
9. Provide a case you managed well and why?
Case 1 – Automated Office
In his 20s John set up his “Automated Office” (see details in Part I, Key Dates above). It was both a well-managed case as well as one that did not end up going well. The early success of this business showed him that he has strength in dealing with people, especially staff and clients. He feels that he can see the different strengths in people and if there is a problem, he has the ability to drill down to determine the root cause. He is not afraid of challenging people to succeed and often encourages staff to be successful. He has carried this strength into his successful cleaning and related businesses. John had the best lessons of his business life in Automated Office and realised how the many parts make a whole business.

Case 2 – Ecobin
The Ecobin project (see details in Part I, Key Dates above) was an amazing almost overnight success. From initial idea to implementation took only 6 weeks. It was a good business idea with the right team of people to see it through to successful implementation. Both Planet Earth and Ecobin tell a story about what his clients buy. One can obtain cleaning services anywhere but his environmental way of being embodies an authentic purpose - a desire to be responsible. After all, as John says, “we only have one planet”. 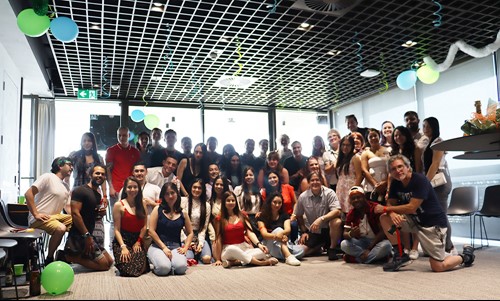 The Planet Earth Team
John is on the far right of the front row.

10. Provide a case that did not go well and why?
Case 1 “Automated Office”
This was a successful business for some years but in 1992 it suffered due to changes in the Industry and the inability of the key supplier to move with the market (see details in Part I, Key Dates above).

Cases 2 and 3
When he sees a problem that is not likely to be resolved he has been quick to “cut his losses” to stop it from becoming a major cost. Below are two examples of start-ups he trialled but discontinued. Both ventures stalled partly due to with direction issues between John and the partners in these businesses. The commercialisation stage also presented with issues that were not foreseen. The cases are:

11. What conclusions can be drawn by comparing these cases?
John notes that perhaps he is best suited to being in control rather than work with one or more partners, at least on a daily working basis. When working with partners he believes that there are two key factors, trust and chemistry. John has had a mixed history in working with a business partner. He says that the more control you have over the direction and ownership of the brand the more efficient you can be in investing into its success. John considers that the main lesson to be learnt in the cases in Questions 9 and 10 is that ownership and control of the business/brand is vital.

V. COVID-19
13. How has the virus affected your business?
Both Eco Bin and Planet Earth struggled as demand for its services have reduced due to the necessity to work from home and the closure of offices and schools. As mentioned in Point 15, John is finding it difficult to find enough people to clean for him. While clients are re-opening and business is beginning to pick up, he is acutely aware of the need to ensure that he has the resources to provide his services.

14. What lasting impact do you think it will have on your business?
Even with plans in place, one cannot take the future for granted. As a chess player, John thought one could always strategise. However, 2020 showed him business and life can be like poker with the sudden receipt of the COVID-19 “hand”. He is now considering his options regarding possible lasting impacts on the change on how and where he works. And while business has returned to a new normal, a key issue will be in the medium to longer term whether there will be less occupied office space, resulting in less floor area to clean.

15. What have you learned from it that you will now implement in your business?
John thinks keeping one’s options open is an important lesson, where one needs to be ready for various challenges. Currently Australia has closed borders from overseas workers, and the availability of people to do cleaning is becoming more difficult, and thus it is very difficult to get staff and he is looking at alternatives.

17. From your experience what do you think are the advantages and disadvantages of family working in the business?
John said it may work well, however he once had a family member work for him and found it difficult to manage him due to their relationship. At Automated Office, the business worked well and then he worked with two other people who were brothers and the business did not go so well. Once they left, the business improved again. John felt it was difficult to discipline one of the brothers due to the effect on the other brother. John thinks that working with partners is difficult but can be further complicated if there are also family connections to deal with.
He considers that family businesses may work with the right people, with the right attitudes and says that he has seen some of these businesses work well. He further considers that working with family members at a Board level may not be so much of a problem, but day to day dealing can be more complicated. 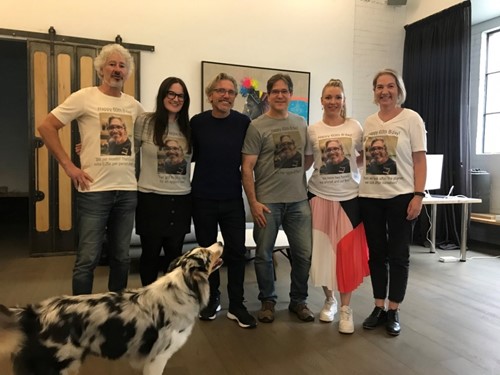 The head office team celebrating John’s 60th by wearing some of John’s favourite slogans.
The t-shirts came from Vinnies (Also all cleaners uniforms are “fair trade”). 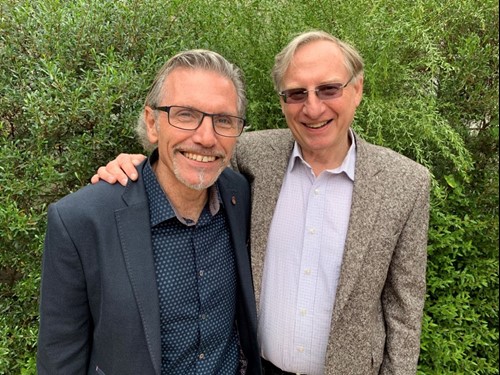