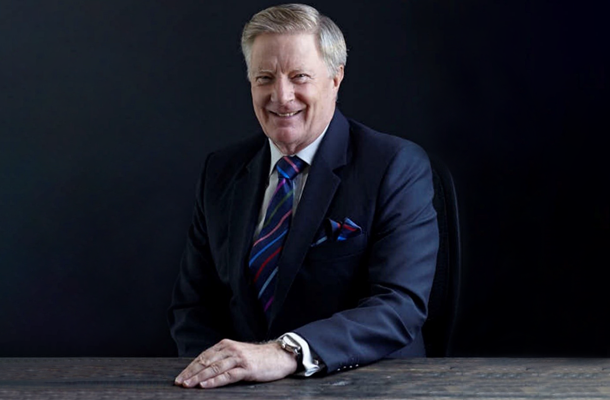 Executive summary
The Universal Business School Sydney (UBSS) commissioned Cyril Jankoff and Daniel Bendel to write a second book for them, a book on entrepreneurs. Its purpose is to give new local and international undergraduate and MBA students a feel of what everyday Australian business success looks like. To give a realistic view of successful entrepreneurship the authors chose 15 successful entrepreneurs and interviewed them. This is the 11th interview. Each interviewee was asked the same questions and later the authors reviewed all interviews and summarised the commonalities. The focus of the cases was on Sections III to VI.

Key points from the interview

Alan Manly OAM
Alan Manly is the founder and managing director of Group Colleges of Australia (GCA), which includes the Universal Business School of Sydney (UBSS).

Alan is a Justice of the Peace (JP) and a Fellow of the Australian Institute of Company Directors (FAICD) and has over the years been active in representing the industry and is a former Director of the Australian Council of Private Education and Training (ACPET) and a former Board member of a national Higher Education industry representative body, now called the Independent Higher Education Australia (IHEA). Alan was honoured in the Queen’s Birthday 2021 Honours List with the Medal of the Order of Australia (OAM) for his contribution to tertiary education.

One of Alan’s many published articles is referenced in the below link. It is a quick summary of some salient lessons and harsh truths about business success that everyone thinking of going into business should read 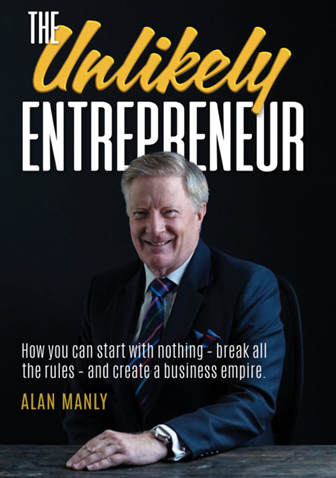 Cover of the “Unlikely Entrepreneur” book.
In reviewing the book Ross Cameron, the Skynews “Outsiders” host summarised it well when he said, “This is business as it should be taught – in the raw. For those who want to act, not talk. Littered with gold nuggets.”

II. Getting to know the person?
1. What is success?
Alan summarises success as a “well provided for family”, that is providing security to his family. He explains that security is more than financial and includes psychological security. He gives the example that it may be better to live in an overcapitalised house in the area you feel comfortable in rather than a huge mansion where you “feel like a fish out of water”. He also stated that the above security may vary depending on the life stage of the key family members.

He ended this question by saying that his company provides education in the form of an MBA for entrepreneurs, with his graduates going on to follow their dreams in business. Alan feels that with 500 graduates each year, his work is done.

3. What are your hobbies and/or interests?
His hobby is business. Alan is also very interested in politics. He enjoys those cleverly made television shows such as Yes Minister and the History Channel, as well as David Saul Alinsky’s book that discusses issues on our big picture social structures.

II. Tips
4. How did you get through your worst times?
An article that discusses his worst times. “When Sydney businessman Alan Manly received an unexpected invoice for $115, he had no idea it would lead to a 10-year court battle and end up costing him hundreds of thousands of dollars. What the then not-for-profit director thought would be a simple bill dispute spiralled out of control and ended up in Australia’s highest court with the epic battle costing him, his business partner Julian Day, and his family in more ways than one. Representing themselves, the pair endured 250 court appearances over 34 cases that Mr Manly estimates cost him in excess of $200,000 and millions in opportunity costs over the ten years. It was “very costly socially as well”. “I was at a point in my life where I was a successful businessman in my 40s. I had a house in a middle-class suburb with a swimming pool out the back and a Mercedes Benz in the driveway, and it all fell apart. I was devastated.”

When asked about how he got through his worst times Alan responded that “he needed therapy”, and that is why he wrote the “When there are too many lawyers” Book. 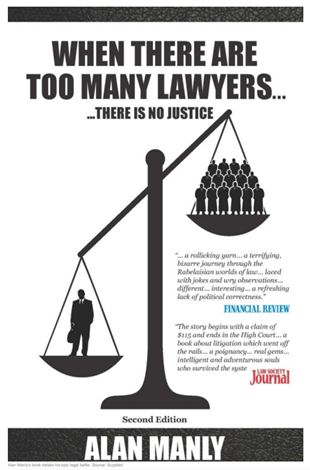 Cover of the “When there are too many lawyers” book.

He said while writing the book was difficult, it was a liberating experience and allowed him to put the tumultuous decade behind him. He said the whole experience still haunted him. “It took 10 of the best years of our lives,” and “I was on the brink of bankruptcy, it left my entire family traumatised. It was only after I read the ninth manuscript of the book that I could do so without crying.” And while he certainly isn’t anti-lawyer and uses them in business dealings, he has one word of advice for anyone considering taking legal action. “Do it with your eyes wide open,” he said.

Knowing that this interview will be read by students considering higher studies, going into business or both, Alan elaborated saying that the “10-year court battle” was an unfortunate situation where he was trapped and felt he could only move with the tide. He said normally the hero is a person who volunteers to risk his or her life for others but here he did not volunteer but was trapped, and as the legal cases progressed, and the legal fees added up, he began feeling more and more like a failure. Alan said that he was lucky that he did not lose the family’s house and all their possessions.

5. What keeps your awake at nght?
Alan said that after all these years cash flow still keeps him awake. To this day his office still provides him with a daily cash flow analysis. After what he experienced with his court cases, he has an insecurity regarding cash flow. He dryly states: “If your money ends so does your business”.

6. What are you typical daily routines?
Alan said that his daily office routine is:

7. What advice would you give yourself starting out?
He advised:

IV. Business case examples
8. Provide a case you managed well and why?
As we saw in the chronology at the beginning of this interview, in 2010 GCA moved into the 5000 square meter Redfern buildings campus. Because it had 5000 students it was a very busy place, as the campus had a high school, an English college, a vocational education college and higher education school. This created problems including noise, where noisy high school kids were not compatible with MBA students. Alan considered the matter and closed the high school down. The organisation’s headquarters left Redfern in 2016 and went to its current premises, at 233 Castlereagh street Sydney. The organisation was reduced to three campuses:

The three new individual campuses allowed exacting cost analysis. Alan made a simple cost benefit analysis of each of the campuses. From this analysis it became quite clear that a focus on the higher education component was sensible as it was relatively easy to run, it was profitable and had a good future. From this analysis it became a simple process of keeping the higher education campus and closing the other two campuses. As all three were owned by the same entity it would have been too difficult legally to sell the two unwanted businesses and in December 2018 they were simply closed down. Having closed the two businesses down meant that three quarters of the organisation’s staff were retrenched. Alan organised that a very senior executive in the company of external experts spoke to each staff member in order to explain the situation stating it wasn't personal but business and assisted staff in their transition out of the organisation.

9. Provide a case that did not go well and why?
The organisation recently set up a satellite campus in Thailand to test the market for online learning. However, online learning was traditionally not permitted in Thailand causing some difficulties, with client acceptance. COVID fortunately changed the reality such that online learning is now allowed and had to be accepted. The whole project was expensive and time consuming. One benefit from this venture is that this enhanced the research and development for the running of other satellite campuses and online courses without damaging the core business.

10. What conclusions can be drawn by comparing these cases?

V. Volatility (for example COVID-19)
12. How has volatility affected your business?
Unfortunately, the COVID-19 pandemic has hit the business hard. In August 2021 its revenues were down 60% from pre-pandemic times. However, from the outset the organisation was mindful of managing risk and did several sensible things. The first is that it sought students from a diverse range of countries, and this was very helpful when the China sought to dissuade students from studying in Australia. The second was sourcing local and overseas students living locally (referred to as onshore students). This latter strategy helped to mitigate against the loss of students due to COVID prevention measures which closed international borders. Some of the Australian universities have had major problems due to students being unable to attend Australian universities, and thus had to let substantial numbers of staff go. It is to the credit of the organisation that not one staff member has been let go during the current pandemic.

13. What lasting impact do you think it will have on your business?
The impact has been significant. Australian international education is a $40 billion export business which quickly halved. Fortunately, classes can still be taught online but the revenue to the various education providers, and indeed the country, is substantially less than it was prior to the pandemic.

14. What have you learned from it that you will now implement in your business?
The organisation has learnt the importance of being flexible in managing the online and blended learning settings and being able to quickly adapt to changes going on around them.

Alan is positive about the strengths and culture of a family business and thinks it is a powerful way to run a business as long as the appropriate advice and expertise is properly considered. It may of course be a benevolent dictatorship. Interestingly this is not unwelcomed to a customer base for Asia.

Authors’ note – Alan’s attitude about the strengths is not dissimilar to that of many other interviewees. 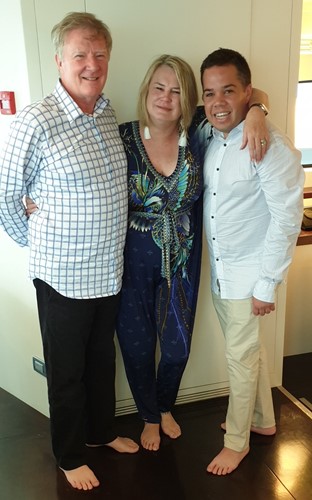