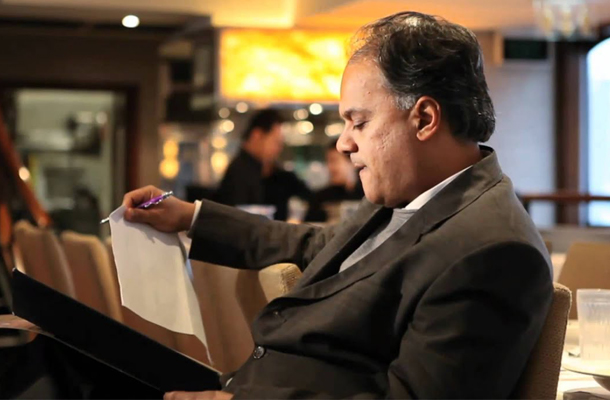 Foreword
The Universal Business School Sydney (UBSS) commissioned Cyril Jankoff and Daniel Bendel to write a second book for them, a book on entrepreneurs. Its purpose is to give new local and international undergraduate and MBA students a feel of what every day Australian business success looks like. To give a realistic view of successful entrepreneurship the authors chose 15 successful entrepreneurs and will interview them. This is the first interview. Each interviewee will be asked the same questions and at a later stage the authors will review all interviews and summarise the commonalities. The focus of the cases is on Sections III to VI.

Sudhir Warrier (He is known to all as “Warrier”)
“From fruit and vegies to Cruise ships”: Combining Malayali (native speakers of Malayalam, originating from the Indian state of Kerala) pragmatism with Australian entrepreneurship and risk-taking.

II. Getting to know the person.
1. What is success?
Warrier sees success in business terms. He feels that it is a little like a scoreboard: if he accumulates more wins than losses then that is success. Even a small margin, for example, 20% of wins over losses is acceptable. The profit and loss statement is another indicator of success. He does not look at personal life the same way and keeps that separate.

2. What is your favourite TV show, movie or book and why?
Warrier enjoys the “Bollywood” style movies, particularly from Southern India for relaxation. He does not watch much television.

3. What are your hobbies and/or Interests?
Warrier loves cricket, playing and watching. He also plays social badminton with a regular group.

III. Tips
4. How did you get through your worst times?
The 2002-2004 Severe Acute Respiratory Syndrome (SARS) was a viral respiratory disease and had some effect on cruising in 2003, but it did not hit him hard as he purchased the business in 2005. However, 18 months after he purchased the business the Global Financial Crisis (GFC) hit the world. Warrier’s business, was hit very hard as he had to service the debt. Since the GFC the business has done well until the 2020 Covid-19 pandemic hit. This will be discussed in Section V, below.

5. What keeps you awake at night?
Not much keeps him awake at night. Warrier can switch off after working hours. He thinks his daily routines help, discussed in the next question immediately below. Other things that help are light entertainment such as cricket or Bollywood movies.

6. What are your typical daily routines?
Warrier has a predictable routine and works from 8 am to 8 pm. He gets to sleep around 11 pm, and up at about 6 am. His routines include:• In the morning he has a coffee, reads the news and goes for early morning walks, and often walks to work across the Sydney Harbour Bridge.

7. What advice would you give yourself starting out?
Warrier advises young people starting off to be careful about blindly following personal passions and they need to look at the commerciality of their decisions. He suggested that the main problem in starting out is often working capital, that is having adequate cash as and when required. Accountants call this having adequate cash flow. He recognises the importance of reviewing cash flow and profit and loss figures as regularly as possible. He gives further advice that one needs to be very careful about hiring anyone you know. Always select the best person for the job.

8. What cross cultural issues did you experience? How were they overcome? How is Australia different?
Warrier said that he has offices in India and Australia and that there are differences in the way his Indian and Australian staff work. Australians are more structured. For example, they often have set routines of, say always having a family meal at 6.30pm. Australian culture sees one’s work and private lives as separate and distinct. By contrast Indian culture is that these areas merge, and their work is much more fluid. One night an employee may work to 6 pm but on a regular basis they may work far longer. In India working hours are much more flexible.

Warrier takes these differences into account when he manages his Indian and Australian staff. His Indian employees are often more flexible and often prepared to work extra hours to get the job done. In contrast he finds that Australians are focused on getting the job done in the hours available thus they can be more efficient? Asian culture tends to have a more structured “class orientation” compared to Australia. Age and Titles are more significant in Asia. Australia is much more egalitarian which has some positives and negatives in terms of managing employees and his approach is modified when managing in Australia. For example, he would rarely ask an Australian employee for something after 7 pm.

Gender has not been a big issue for them. Hospitality and Tourism have a high female participation rate which leads to a positive culture. The operational area (ship operations) is mainly male, but he has not faced any gender problems. Many of his ship operational staff (captains) are long standing, some in the business for over 20 years. One of the existing effects of COVID-19 is that because of Government support it has become difficult to recruit waiters. He said that it will be interesting when Government support reduces at the end of March 2021.

IV. Business case examples
9. Provide a case you managed well and why?
The first example occurred on New Year’s Eve 2019 when he had 2500 passengers wanting to take one of his tours, but he only had 1300 available seats. He managed to charter extra boats to cater for the demand. What is the lesson to be learnt? He says flexibility and the benefit of having some good connections.

The second example occurred after the Ocean Spirit disaster described in Question 10, below. This is where Warrier re-focused on his key strength, the Sydney Harbour cruise market. After 18 months an opportunity to buy a boutique glass boat arose. With mainly “gut feel” he purchased the boat, and the acquisition has been so successful that within a short period he purchased a second boat and launched the business as “Clearview Cruises”. It is now the top cruise operator in Sydney. The lesson? Be flexible and open to opportunities. 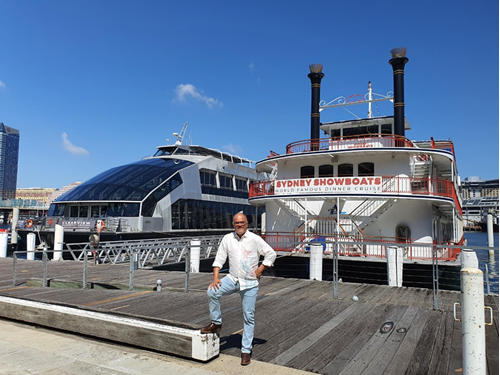 Warrier and his two cruise ships:
Clearview on the left and Sydney Showboats on the right

10. Provide a case that did not go well and why?
Warrier’s business is seasonal being busy during the October to March warmer months. To even up his business he looked to buy a business that is busy in the alternative season, that is in July and August. Warrier found a business that fitted this strategy in 2011, when Warrier purchased the Ocean Spirit business in Cairns. He commissioned several expert reports and did a careful due diligence on the new business. However, despite all this, the business did not do well and after 2 years they had to sell it.

The problems were the twin issues of being overconfident about their business model and underestimating the local competition. Warrier’s Sydney business was very strong with good systems and had a good relationship with the local booking agents. However, this was not the case in Cairns, northern Queensland. The local Cairns agent network operators did not want to support an “outsider” and did not promote his business but did promote his competition. In summary, Warrier analysed the business itself but failed to look at the potential threats from taking over a local business with its own politics.
How could he have avoided the problem? Assuming he still would have gone ahead with buying the business, Warrier says he would have restructured the business into a different model, that is he would have:

Clearly a combination of tough business conditions and being locked into high costs cost the business dearly. Perhaps if the fixed costs were lower the business may have been able to slowly rebuild after the initial difficulties with the local agents.

11. What conclusions can be drawn by comparing these cases?
Warrier has learnt the importance of looking at what can go wrong when evaluating business opportunities. He sees external “threats”, which are these events that occur outside your control, as the most important element of the well-known SWOT (Strengths, Weaknesses, Opportunities and Threats) system of business evaluation.
The strengths and weaknesses relate to the internal environment, being an environment that you have control over. The opportunities and threats relate to the external environment, the environment which you have no control over. Examples include COVID-19, interest rates, economic conditions and competition.

V. COVID-19
13. How has the virus affected your business?
In 2020 Covid-19 pandemic, with operations closed for 6 months. Later outbreaks mean that he missed the lucrative Boxing Day (2020), New Year’s Eve (2020) and Australia Day (2021) markets. On New Year’s Eve 2020 his business had 150 bookings, which was a 94% reduction on the previous year due to COVID-19. This shows that external factors can affect any business no matter how well run. Warrier’s business was effectively closed for 6 months. He is confident that business will improve but sees 2021 and even 2022 still being impacted and a full return to normal business in 2023. He said that the business had to stand down 120 staff but recognises the assistance of Jobkeeper and other subsidies to keep the business going.

14. What lasting impact do you think it will have on your business?
Warrier sees COVID-19 as a wake-up call. He feels he could have been better prepared to deal with the pandemic. He thinks businesses need to review their operations and resources regularly and closely. His business has a high labour input cost in its operating cost structure, and thus the business needs to carefully manage its labour. Although the business was not operating during the COVID-19 lockdown, key staff were still working hard on the firm’s marketing strategies and planning for the future. Previously 75% passengers were international passengers, but in early 2021 they are at 100% local passengers. In early 2021 the business is running cruises 6 to 8 cruises per week, while in the pre-COVID-19 world it was 55 cruises per week There is an increased amount of bureaucracy in dealing with the complex protocols relating to COVID-19 safety, and this has been reasonably challenging. Warrier has found generally the level of bureaucracy in his business is acceptable. Warrier stated that he was in the process of evaluating a $30 million business purchase just before COVID-19 hit. He did not proceed and feels that he has “dodged a bullet”.

15. What have you learned from it that you will now implement in your business?
COVID-19 has brought him back to the drawing board and is working hard to re-evaluate his business to cope with these difficult times. He watches his profit and loss statement very closely and does so almost daily. He also focuses on the trading profit rather than net profit after fixed costs. This is so that he can make quick decisions on his controllable area of costs which exclude fixed costs.

Australia is a relaxed place to live. He has found working hard can pay off well in Australia and is very appreciative of his Australian home. Warrier concentrates on two areas:•

As for the secret of success Warrier believes:

VI. Family Business
16. Are you in a family business?
No. See answer to the next question.

From my experience, multiple family members (especially husband and wife) working together is rarely a good model. I hear staff complaining about this scenario in many other businesses. When it comes to me, I believe in a committee of 1 – just me.
My family members are not directors either, I make all of the decisions so that the senior management has clear direction, rather than mixed messaging, especially when it comes to marketing and product delivery. 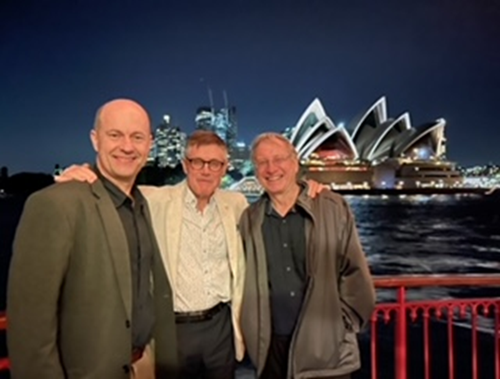